Erica Robbins, a District 5 candidate for Birmingham’s city council, is the founder of Be A Blessing Birmingham, a group that brings awareness and support to Birmingham’s homeless population.

Other Candidates Running In District 5

Your current councilor is Council President Johnathan Austin. We look forward to posting an interview with him.

Chris Davis, Darrell O’Quinn, Jeremy Schatz, Robert Walker and Dorothea Crosby are also running. Click on each name to learn more about them via their personal campaign and/or social media page. You can find all the candidate interviews we’ve posted at the bottom of this post.

Communities And Neighborhoods In District 5

For more detailed information about your address and district boundaries, please check out this link to the City of Birmingham’s online mapping website.

Need some help navigating the map? Message me on the Bham Now Facebook page, (@bhamnow) and I will make sure you find your neighborhood and district.

“Friday, July 14, via Facebook Live at Linn Park in Birmingham.”

What is the name of your principal campaign committee?

“I am running for city council because Birmingham is a city of great potential.  We have a strong history of social change and of industry.

“I want to see us get back to those values as a city.  While the downtown Birmingham area is revitalizing, the surrounding areas of Birmingham need attention in terms of economic growth, education initiatives and services.

“Many of our residents are living below the poverty level and are eager to get back to work.  I intend to make that happen to the benefit of both individual residents and the community.”

“I graduated from Munford High School in 2000. I was ranked third in my graduating class. I received several full scholarships, however, I chose to matriculate to Stillman College in Tuscaloosa.

“So, I chose to work in corporate America in communications and banking for more than 10 years. Shortly after moving to Birmingham, I felt something missing.  While getting up in the morning I would often look out of my window to see my homeless neighbor, Marcus.  This inspired me to begin working with the homeless population.

“I spent two years working in shelters, but this experience made me realize that we are not doing enough. In August 2015, I founded Be A Blessing Birmingham (formally known as #helpforthehomeless) to better address the needs of our homeless neighbors.”

“As a responsible and independent citizen of Birmingham, I have attended and followed city council meetings.  I have been a part of and volunteered with initiatives set forth by the mayor’s office for community engagement.”

“Transparency is of key importance to me and my campaign.  If elected, my team and I intend to create a comprehensive and interactive website that makes all measures and decisions easily accessible to my constituents.” 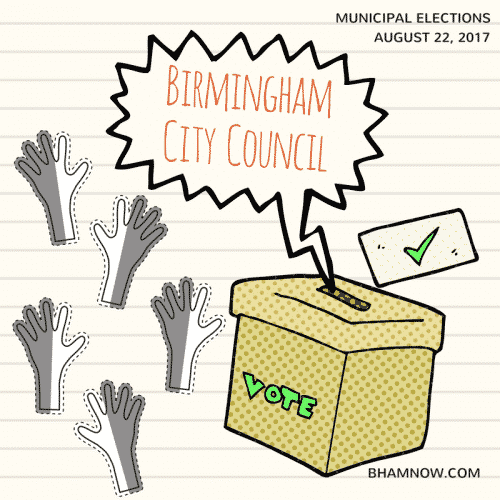 LINKS TO OTHER CANDIDATE INTERVIEWS