This West End mural is hard to miss. But, do you know the inspiring story of its creation or the long-standing local business hiding just behind it? Read on for full details.

One of the most gorgeous murals in West End

Bham has no shortage of impressive murals. Across the metro area, you will find buildings carefully crafted with bright colors, encouraging messages and unmatched artistic talent (I mean, just look at the detail on that instrument!).

Today, we’re highlighting one of the most gorgeous murals in West End, encouraging us to “find our magic” in The Magic City. This piece was created by local talent Marcus Fetch, who is well known for his one-of-a-kind additions to the Birmingham mural scene.

Designed to honor and inspire

The mural is phenomenal, and is only enhanced by the touching story behind it. I caught up with Jason Jones, who commissioned the painting. Unfortunately, Jason has seen great personal loss over the last year, including the passing of his mother and middle son.

When Jason’s mom passed, she left some money behind for him. He shares that although it could have been used for any number of things, he felt it was important to honor her in a way that would have a lasting impact in the community.

“The mural came about through my love of art, and my belief that art changes lives. I could have used the money to paint the old building white, but I chose to paint one side with something that hopefully means something to everyone that sees it, like it does for me. Marcus Fetch is such an amazing artist, and I can’t wait to see this legacy live on.”

So, how did Jason choose this building for the West End mural? Well, it’s home to his business, The Liquidators. Longtime Birmingham residents may remember his late father-in-law, Neil Monroe, who started the biz back in 1977.

That’s right, big things are happening inside the building, too. As Jason explained it to me, The Liquidators help restaurants that have closed (due to COVID or otherwise) by clearing out their equipment and machinery. They haul it back to their 25,000 square-foot warehouse and refurbish everything, so that a budding restaurant can purchase it at a reduced price.

He says this gives aspiring restauranteurs an opportunity to pick up necessary resources at a reduced price, while simultaneously streamlining the (often complicated and upsetting) process of closing a restaurant.

And they’ve helped a few local favorites get things rolling…. including spots like Hamburger Heaven, Jim ‘N Nick’s, as well as the original location of Zoe’s Kitchen, to name a few.

Want more local biz updates? Get our newsletter delivered straight to your inbox. 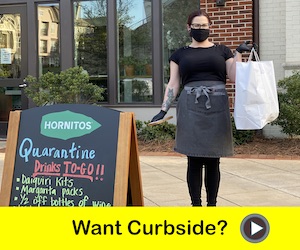