Springtime in the south: the crack of the bat, the roar of the crowd and the smell of hot dogs in the air. What could be more American than baseball and the SEC?

The SEC Baseball Tournament will be back in Hoover for the 21st consecutive year May 22nd through the 27th at Hoover Metropolitan Stadium. Twelve teams from the best college baseball conference in the country, full of future Major Leaguers and legitimate national championship contenders, will light up the Hoover Met.

The Road to Omaha and the College World Series goes through Hoover, AL

The SEC Baseball Tournament has become a proving ground for teams on the road to Omaha and the College World Series, and last year’s event continued that tradition. Florida, LSU and Texas A&M advanced to the College World Series; Florida and LSU reached the championship series there; and the Gators swept the Tigers to clinch their first baseball national title.

Florida was the SEC’s fifth national champion in the last nine years. The SEC also has had six national runners-up in the last 10 years. Twice in that span, one SEC team beat another in the championship series. It’s been a decade of baseball dominance by the conference known for its football prowess.

Baseball, it’s all about the stats!

Baseball loves numbers, and the numbers don’t lie. When you’re watching the SEC Tournament at the Hoover Met, you’re watching the best college baseball conference in the country. Look at more stats worth bragging about from the last 10 years alone. Since 2008: 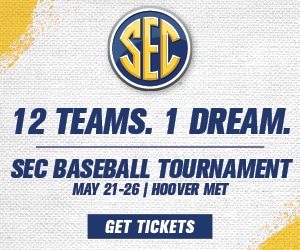 It’s no coincidence that the SEC Tournament has become the Birmingham area’s highest-attended annual sporting event, with last year’s attendance reaching a whopping 127,479. Birmingham has a rich baseball history. Rickwood Field is the oldest professional baseball park in the country. We also are home to the Negro Southern League Museum.

Get out of the sun for a spell

If the May weather turns unseasonably warm or you’re just looking for some fun between games, you can step into the spacious new Finley Center and join the SEC FanFest. 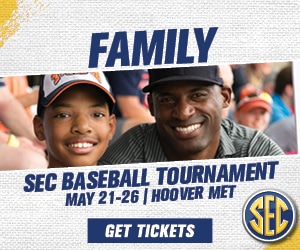 Admission to FanFest is free for all SEC Tournament ticket-holders, and you can come and go as you please between the Finley Center and the Hoover Met. Kids will enjoy inflatables, video simulators, a zip line and miniature golf, among other interactive activities. There will be a sports bar inside for adults, with live entertainment and food options for everyone. Oh, and don’t forget to ride the Ferris wheel outside!

Click here for all the FanFest info you will need.

“Over the last two decades, this community has come together to build an event that’s special regardless of the teams that make the field or reach the championship game,” said Gene Hallman, executive director of the Alabama Sports Council. “The SEC and the city of Hoover keep raising their game year after year.”

As you get ready for Memorial Day, plan to attend the fun-for-all SEC Baseball Tournament May 22-27 to watch teams from the best college baseball conference in the nation play in our own backyard. The Hoover Met is a quick 8 miles from downtown Birmingham, AL. 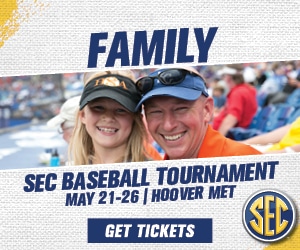 Get your tickets here!

All games Tuesday-Saturday will be televised live on the SEC Network with Sunday’s championship game shown live on ESPN2 at 2 p.m. CT.

Make your plans; tickets are on sale now!