Birmingham, AL is one of 14 US cities to host the Navy. Last month we wrote about Navy Week, April 9-15. Check out the events, festivities and visit sites. Take in a Barons game, visit the McWane Center, stop by Vulcan Park and Museum and support our US sailors!

Monday, April 9, 10:00 am
Navy sailors will visit the park and museum as part of Birmingham’s Navy Week festivities.

Mayor Randall Woodfin will parachute into Railroad Park on Monday, April 9 at 4:40 pm with the Navy Leap Frogs!

Mayor Woodfin will present a proclamation to Navy officials at the start of the Birmingham City Council meeting,
Tuesday, April 10
9:30 a.m. 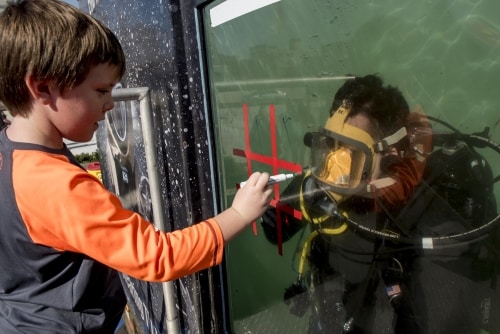 Since 2005, the Navy Week program has served as the main way this branch of the service has reached out to parts of the country that don’t have a strong Navy presence.

The program is designed to help Americans understand that their Navy is deployed around the world, around the clock, ready to defend America at all times. Linda Rojas, NAVCO’s director.

Birmingham and 13 other US cities were chosen for a variety of reasons including Navy knowledge and awareness, Navy recruiting data, demographic information and namesake ties of ships and submarines.

In fact, sailors assigned to the USS Alabama will be some of the star visitors to Birmingham!

“Navy Weeks allow us to showcase the sons and daughters of America who serve in today’s Navy. We focus on sharing in communities across the U.S. who often have little to no contact with Sailors,” said Cmdr. Linda Rojas, NAVCO’s director.

“We’ve found that these exchanges have gone a long way for raising awareness of the Navy and establishing and maintaining relationships with the people we serve.” Rojas.

Navy sailors will converge on the Magic City from all over the country to take part in exciting activities; meetings, educational sessions, demonstrations and entertainment.

Being chosen as one of 14 US cities is another opportunity to show off our town while honoring the US Navy. Plan to come out and show your support!