This week while researching for a story about lost pets, microchipping and web sites that help reunite lost pets with their humans, I ran across an article about a Birmingham woman who lost her beloved pet Mitzy on the day she was moving away for a new job.

A month later Mitzy the cat was found, nibbling at cookie scraps behind a local bakery. With the help of microchip technology, they celebrated a happy ending.

The article was heartwarming and worked well with my angle of microchipping our four-legged family members (not Grandpa…FOUR legged!)

Well turns out, this did happen in Birmingham…um, Birmingham, England. I decided what the heck, I would email her anyway (the human, not the cat Mitzy.) Apparently a random guy from Alabama asking about her lost cat seemed a little strange to this woman.

But we have plenty of heartwarming dramatic pet rescue stories right here in our Birmingham…the one in Alabama!

Losing a pet is awful. Every single year one out of every three pets goes missing. Studies show that 90 percent of them are never found, often because they can’t be identified. Hundreds of animals go missing each year right here in the Birmingham area.

Microchipping dramatically improves the chances of having lost or stolen pets reunited with their humans. It also helps animal control officers, shelters and vets work quickly to get these furry family members back to their families while using less resources.

A story of a Magic City microchip success

” My friend Jenny went to a concert at the Lyric last night, and when she was walking down the street, this friendly, rough looking white/grey cat walked up to her, obviously wanting attention. She looked to be a stray, so she took her home for the night and brought her to the vet clinic outside my shop this morning to get her shots and scanned for a microchip.

Mind you, this kitty had been declawed on the front, so she was not supposed to be outside. I called the microchip company when the number came up, they contacted the owner, and I just spoke with her.

The cat slipped out of her house in IRONDALE about a month ago, and somehow made her way downtown. Get them microchipped! Via- Will Sheppard, on Magic City Kitties Facebook.

A microchip is not a GPS tracking device. Many people have the mistaken belief that microchips work similarly to GPS, that if lost, one could simply track their animal’s whereabouts by looking on their computer.

A small vial about the size of a grain of rice, which has a unique number kind of like a barcode, is implanted just under the skin, which can later be scanned.

Pets reunited with families after disasters

In 2011 after the many tornadoes that devastated parts of Alabama, pets reunited with their owners the quickest had microchips.

According to the Alabama SPCA, microchipping your pet can cost in the range of $40-$90.

The Alabama SPCA offers this service for for cats and dogs. Contact them directly to find out more about their participating vets.

There are plenty of animal lovers who volunteer at shelters and some who aren’t as hands on but develop products and web-sites to help reunite lost pets with their humans.

If you lose a pet, most all the Birmingham neighborhoods have community Facebook pages. It’s a good idea to keep a recent photo of your pet, especially if he’s the sort to wander away or jump the fence.

Here’s a really recent example of the online community What’s Happening in Mountain Brook reaching out via their FB page about a found pup.

The website  www.lostmykitty.com  and their sister site www.lostmydoggie.com have different services that help push out photos and details of your lost pet to all social media platforms and to local vets and shelters. I checked, and it looks like 170 Birmingham, AL pets have recently been reunited with their families through www.lostmykitty.com. 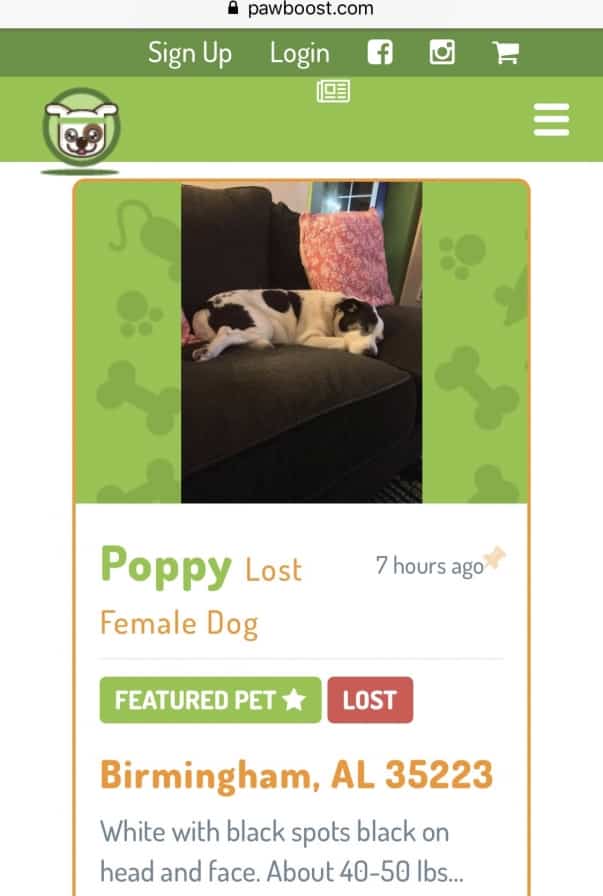 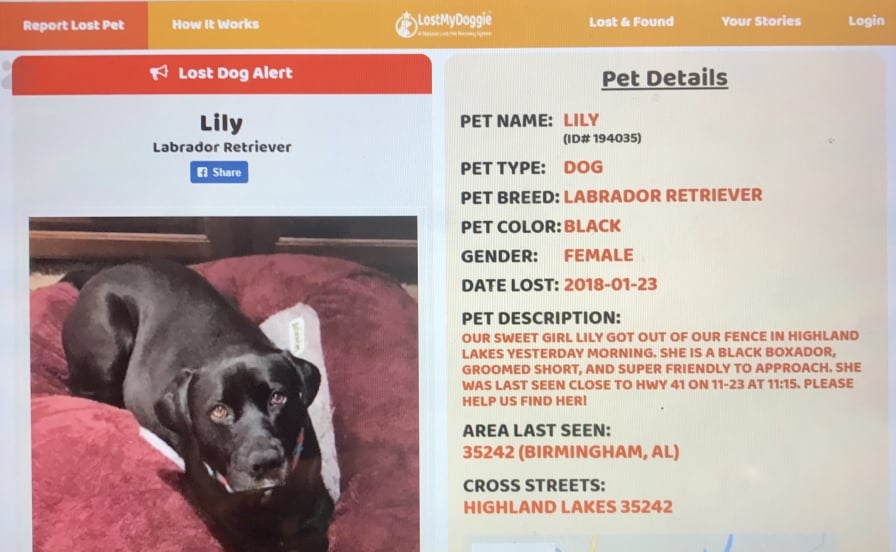 The website www.pawboost.com also posts and pushes out details about your lost four-legged family member to all social media platforms, vets and shelters. They have a network of nearly 300,000 volunteers in their Rescue Squad who have signed up to help reunite lost pets with their humans.

Several Birmingham pooches are listed, both lost and found in the last week or so. Take a quick look at their website, maybe you can help identify one of these Bham pups.

There are also local Facebook pages that might help. A great one is Magic City Kitties. They post all sorts of tips, photos and adoption information and share information about lost and found Bham cats. Check out some of their heartwarming rescue stories.

“I had a dog missing for 14 years that got returned to my parents last year. she was a tiny pomeranian that was stolen and sold as a puppy on craigslist. she got lost, was picked up by a shelter (this was in LA) and they scanned her microchip and contacted my parents. 14 years!! she recognized them, and was so excited to see them … get them chipped!!” Charlene Mullen

Link AKC is for the dog-lover who wants an actual GPS smart collar that really can track your best friend’s activity. This nifty collar works with an app on your phone to track your dog’s activity, and can locate him quickly if he goes missing while wearing the collar.

“Already paid for itself. My dog likes to go next door. I kept calling her, she didn’t come so I got my phone to check, someone had her in the back of his truck! Got Ripley back safe and sound!” TXGIRLFF Via- Amazon.

Considers these options to protect your beloved pet. Should the unthinkable happen, there are some high-tech resources out there to help bring your pet home. Don’t forget to post flyers and contact all the vet’s offices, local shelters and the Greater Birmingham Humane Society.

9 national chains our audience wants to see in Birmingham