Last weekend, I had a big weekend of travel planned with a group of friends. We were going on an 11 hour road trip to Houston, TX for a concert at NRG Stadium. Little did I know 5 months ago when I bought the tickets, Hurricane Harvey also had plans to travel to Houston on the same day that I did. If it weren’t for the unfortunate coincidence of these two events being in the same city, on the same day, and for my very prepared weather-checking friend, I might not have known a tropical storm was headed to Houston.

The concert still wasn’t cancelled. Then it became a hurricane. Concert? Still not cancelled or postponed. The stadium had hundreds of negative comments of people begging them to reschedule. I was one of them. Locals bemoaned the venue, promoters, and even the band for not taking precautions sooner, because they know better than anyone that Houston “floods even when it rains slightly”.

Patrons who chose to fly in literally could not, as their flights were being cancelled left and right. My friends and I decided not to make the journey for obvious reasons. If I had to eat the costs of tickets, so be it. At noon on the day of the concert, the venue made the announcement that the show would not go on as scheduled. We wouldn’t have made it, anyway.

We weren’t able to get a refund on the Airbnb, but that’s okay. These indirect inconveniences are the very least of our worries. Our problems pale in comparison to Houston residents and those trapped in the area.

The Washington Post published some facts about the rainfall in Houston. An estimated 9 trillion gallons of water have fallen on the greater Houston and Southwest Texas areas. 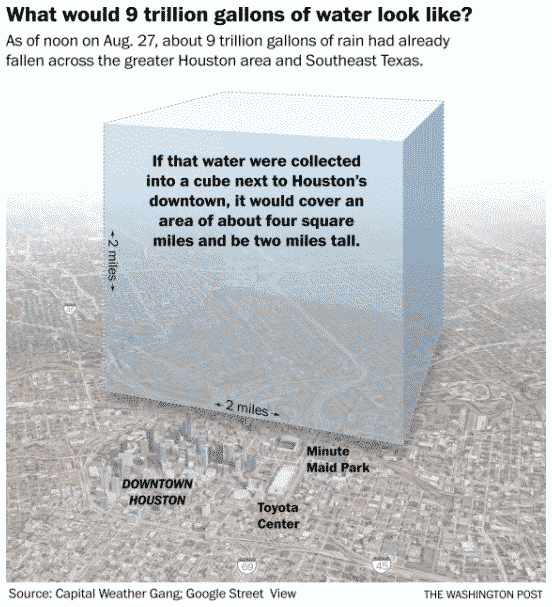 If we averaged this amount of water spread equally over the lower 48 states, that’s the equivalent of about 0.17 inches of rain — roughly the height of three pennies stacked atop each other — occupying every square inch of the contiguous United States.

But here’s the kicker: Just how unprecedented is this? Well, remember the flooding that New Orleans experienced with Hurricane Katrina? Most places saw about 10 to 20 feet of water thanks to levee failure, inundating about 80 percent of the city. Now, if we took the amount of rainfall that Texas has seen and spread it over the city limits of New Orleans, it would tower to 128 feet in height — roughly reaching as high as a 12-story office building.

I called my brother, who lives in Houston to see how he and his family were faring with the floods. While my brother had some water in his yard, and my niece and her cat had evacuated from Galveston, he said the worst of the flooding might be yet to come. The company where he works, KBR, had announced that it would be closed on Monday. My niece’s school has been cancelled Monday and Tuesday (probably all week) in Galveston. My brother said the hurricane appeared to be swirling in the Gulf and headed back to Houston. Now, I hope the hurricane blows out to sea and skips the expected landing. My cousin had to be evacuated from his home by boat.

There are many ways Birminghamians can help in this time of need. Monetary donations are always helpful. A little goes a long way. Diapers for children and the elderly are needed, and blood donors are being sought.

The Greater Birmingham Humane Society is doing what they can to help, too. Their official Facebook page put out an urgent request for fosters for Hurricane Harvey survivors. To make room for the animals that will be rescued in Texas and Louisiana in the coming days, the GBHS asks for help by fostering current animals to make room for the new rescues that will be coming back to Birmingham.

Do you have family or friends who are directly involved in the crisis in Houston?

Please email hunter@bhamnow.com telling your story. We will be posting more about the crisis in Houston in the coming days.