The college football season is nearly over, so now is the time to start switching to basketball and hockey in the Magic City.

Birmingham sports fans will have two opportunities to watch our pro teams in action on Saturday, January 4th.

Last month, I watched our Surge play their rivals from Nashville – Music City Jazz. If you love basketball, the Wenonah Dragons home court is a great place to see a game – upclose and near the action.  There isn’t a bad seat in the house. Perhaps, that’s why the Wenonah Boys won the 5A state championship in 2019.

Surge ownership – a first in Alabama

The Surge is owned by Kimberly Meadows-Clark, the first African-American woman to own a professional franchise in Alabama.

One of the first things you’ll notice during a game is the red, white and blue ball.  The Surge is part of the old American Basketball Association – the ABA.  Even though much of the league was gobbled up by NBA in the 70s, the league that gave us Julius Erving (Dr. J) and George (Iceman) Ervin re-emerged in 1999.

Tickets are very reasonable, and kids under 17 can attend the games for free.   A family friendly venue, check it out.  Purchase tickets – HERE.

If you are looking for a chillier  winter sport which has big hits like football, go see the Birmingham Bulls take vs. Peoria Rivermen at the Pelham Civic Complex, 7:00pm. 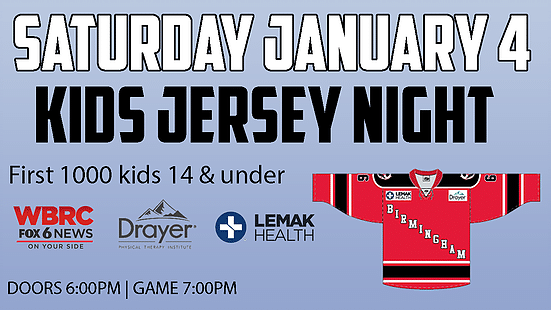 The 2019/2020 season is the third since the Bulls returned to Birmingham after a 16 year hiatus. Last year, the team made it to SPHL Finals. Be prepared for some fun that includes singing James Taylor’s Sweet Caroline and Coke Can races on ice.  For Alabama football fans, you might even get to  see Crimson Tide broadcasting legend Eli Gold.

Make sure to secure your tickets for the game tonight. Also, take a look at the rest of the schedule and promotions.  Visit – HERE.