Grammy winner and world-renowned rock keyboardist and conservationist Chuck Leavell of the Rolling Stones is coming to Birmingham on March 14-15.

A native of the Magic City, Leavell will be delivering the 2019 Stump Entrepreneurship Lecture on “Natural Resource Stewardship and Partnerships”  Thursday evening, March 14, 7:00pm at Birmingham-Southern College.

The lecture is free and open to the public. 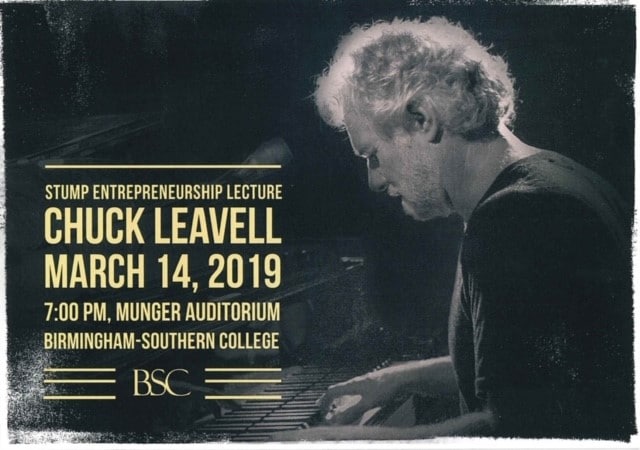 One of the most sought-after musicians in rock and roll, Leavell has toured  with the Rolling Stones for more than 25 years (he’ll join their “No Filter” tour in April), and has recorded and performed with Eric Clapton, the Allman Brothers Band, John Mayer, and George Harrison, among others.

Along with his musical accomplishments, Leavell is a nationally recognized forest conservationist.

Co-founder of the Mother Nature Network and author of Forever Green: The History and Hope of the American Forest, Leavell also produces a PBS program called America’s Forest with Chuck Leavell.

Speaks for the Trees

A tireless advocate for America’s forests, Leavell, along with his wife runs the 2500 acre family owned Charlene Plantation near Macon, Georgia, a  nature preserve and model tree farm enterprise that has been recognized by numerous conservation organizations including the National Arbor Day Foundation, the Georgia’s Conservancy and the Future Farmers of America,

The Stump Entrepreneurship Lecture is part of the Birmingham-Southern Entrepreneurship Program, endowed by BSC graduates Jane and Kevin Stump of Birmingham. Students who have earned the title of Stump Scholars will also spend time meeting with Leavell prior to his public talk.

If you can’t make the lecture on Thursday, there will be another opportunity to see Leavell the next day, Friday March 15. He will be performing at WorkPlay with the doors opening at 7:00pm and the concert beginning  at 8:00.

One final item for an eventful Thursday and Friday.

In keeping with his conservationist roots,  Leavell will donate two VIP passes to the Rolling Stones concert in Miami  on Saturday 4/20. The Southern Environmental Center is pairing this with a luxury two night hotel stay for two, with the winning proceeds benefiting Turkey Creek Nature Preserve. This package will be auctioned off immediately before Chuck’s lecture @ Birmingham Southern College on 3/14.  Proxy bids will be accepted. Call Roald Hazelhoff at 205-427 -4239 for more details.