What a journey UAB Football has been on over the past 4 years!  Capping an amazing comeback story, yesterday, UAB won the Conference USA championship game, 27-25  over Middle Tennessee State University in Murfreesboro, Tennessee.

The win gives the Blazers its first ever Conference USA title in football and 10 win season.  In the two years since the football program has been reinstated the Blazers have an 18-8 record.

More than a football team

Only 4 years after disbanding the football program, led by Head Coach Bill Clark, the Blazers are on top of the Conference USA football world.

With a new stadium scheduled to open in 2021, and a pay raise for Clark  making him the highest paid C-USA football coach, the leadership at UAB is sending a strong message that they intend the football program to stay on top.

Perhaps, even more important than football, the Blazers football team has captured the hearts of the Birmingham community.  For the past two seasons, for homecoming, the team has started a tradition wearing on the back of their uniforms, the names of patients at Children’s Harbor.

Home attendance has also been strong, which has made the Blazers one of the most difficult C-USA teams to play against at Legion Field (they are undefeated at home over the past two seasons).

Sights and sounds of the C-USA Championship

Bham Now was on hand for the big game in Murfreesboro. Below is our collage of photos and videos.

Despite being lightly attended, The Blazers were greeted by the UAB section, which was filled to near capacity.

UAB crowd after the extended its lead in the 2nd quarter. 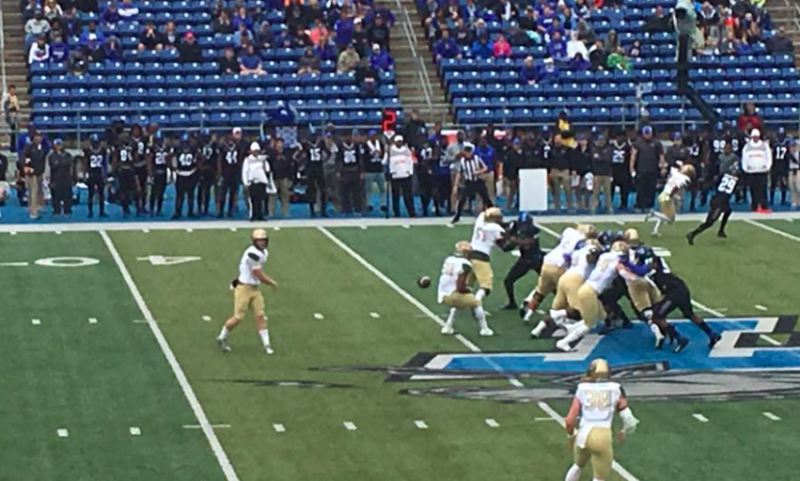 From this morning, UAB received a “helmet sticker” from the folks at ESPN.

According to SI.com, they predict UAB will be playing Miami in the Independence Bowl on December 27th.