You may have heard of the inspiring story of Walter Carr by now. The young man that was determined to make it to his first day of work, despite his car breaking down the day before, is now donating money to the Birmingham Education Foundation.

Walter Carr was just employed by Bellhops, a moving company, and desperately needed the job in order to pay his bills. Carr is currently living in Homewood, and he woke up at 12 AM in order to make it on time to his first moving job at Jenny Lamey’s house in Pelham. Along the twenty mile hike, some police officers assisted him by getting him breakfast and taking him to Lamey’s house in Pelham.

Once Carr arrived to Lamey’s house, the police officers told her about his travel that morning, and she was overcome with emotions. She immediately offered him a meal and a bed to rest in, but he insisted on going ahead and getting the job done instead. According to WBMA ABC33/40, Lamey then took to social media and said, “If the police officer had not shared that story with me, he [Carr] would have never told me. This story would have never been heard, shared and loved by all these people. He set out on a walk that night: 20 miles. Little did he know that he would travel in the homes and hearts of businesses and people all around the world.” 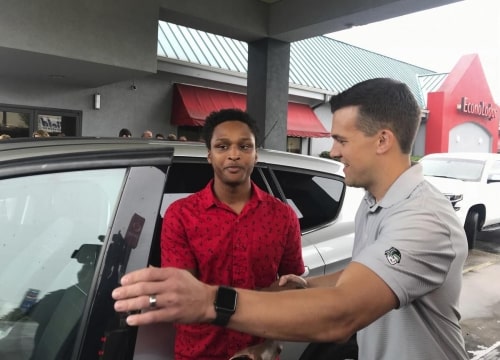 When Bellhops’ CEO, Luke Marklin, heard of Carr’s determination and willingness to push through his adversities, he gifted him with a 2014 Ford Escape. Marklin said to Carr, “It’s served my family really well. I think it will serve yours.”

In the last few days, this amazing story about Walter Carr’s willpower has had people across the country talking about how inspirational he is. Little did people know that Carr loves to inspire and be helpful to others. “I want to get out and help. If I have to travel the nation, I would love to. I just want to inspire and meet people and listen to their story, see how their journey was and see all the Walters out there. I know there are a lot more Walters out here, and I am coming for you all.”

Balancing gymnastics AND a Full-Time MBA? See how this Auburn grad did it