Horse and mule-drawn carriages are staples of tourist activity in locales like New Orleans, Charleston and New York City. They are also heavily regulated. Will Birmingham take a cue from these cities? Residents are concerned.

Cart Before The Horse?

Last week the Birmingham City Council passed a resolution allowing a horse-drawn carriage service to operate within the city, and then outrage ensued. Some residents, like Sara Bush, are concerned about the council’s recent decision. Bush started a petition, and over 7,000 people have signed it. Are you one of them?

Bush told CBS 42  that she is concerned about the health of the animals and safety for motorists and passengers.

“When I found out that the city council just passed this permit without any discussion with the citizens, without any open discussion even in the council chambers, this was kind of shocking to me,” said Bush.

UPDATE: Bush presented her petition to the Birmingham City Council during the public comments section of the Tuesday, April 24 meeting. She gathered over 7, 000 signatures, with over 1,000 of them being Birmingham residents.

While carriage businesses are allowed to operate in Birmingham city limits, the city has not talked about updating the ordinance to reflect regulations like what streets the carriages can operate on or quarterly vet inspections (as opposed to annual ones). 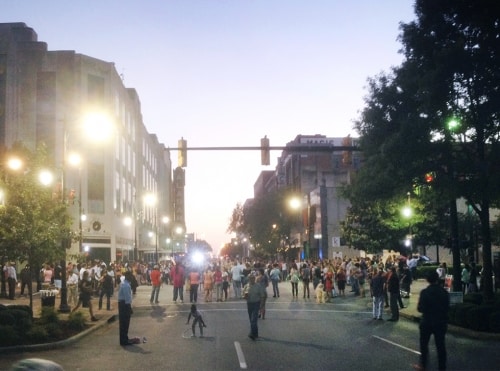 What About The Poo?!

The city of New Orleans recently updated their regulations on the carriage industry to reflect concerns about animals working in heat, inspections, driver certifications and waste removal. In Birmingham, the horses will be required to wear diapers.

Hey, did you know that in New Orleans the carriages are pulled by mules and not horses? Here are some reasons why.

In addition to the petition, the Greater Birmingham Humane Society (GBHS), along with the People for the Ethical Treatment of Animals (PETA) reached out to the mayor’s office opposing the use of horse-drawn carriages in the city. Here’s what GBHS posted to Facebook:

Here’s a copy of the letter PETA wrote to Mayor Randall Woodfin.

UPDATE: The American Society for the Prevention of Cruelty to Animals (ASPCA) outlines some detailed laws that NYC uses to protect horses. You can find them here.

According to Elizabeth Forel, the president of the Coalition to Ban Horse-Drawn Carriages, regulation is one thing, but enforcement is another.

As a New York resident, she also noted to us in an email and Facebook comment that the horse-drawn carriage industry is “simply not competitive or important” in New York.

“The fact that there are many regulations—and there are in NYC—is not the same as enforcement,” Forel said.

“It is common knowledge that the laws do not get enforced.  You make reference to a 2008 statement by the ASPCA—even they knew how unenforceable they are and have not done humane law enforcement since 2014.”

This is Birmingham’s current ordinance for horse-drawn carriages. Do you think it needs to be updated? What is it lacking?

Mayor Randall Woodfin has up to 10 days to sign or veto any item passed by the city council on Tuesday.