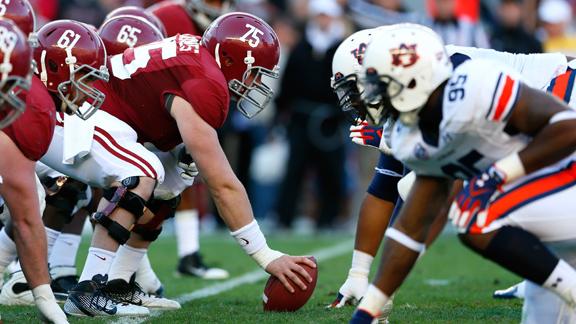 This past Saturday, No. 1 Alabama and No. 6 Auburn went head to head in the 82nd Iron Bowl. And as expected, football fans took to social media to share their thoughts about the game. Here’s a look at the good, the bad and the funny that hit social media before, during and after the Iron Bowl.

Us getting ready to watch the 4th Q of the #IronBowl… pic.twitter.com/tGcJflQPm7

Nick Saban is about to strip everybody's scholarship after this game 😂😂😂 #IronBowl pic.twitter.com/eGISyOgRRo

Unfortunately, the celebration will cost Auburn a serious fine. Just hours after the Tiger’s victory, the SE announced a $250,000 fine for their actions. (This was Auburn’s third fine for violating the conference’s policy prohibiting fan access to the competition area).

& Auburn was fined $250k for this? How could Auburn even stop this from happening? That’s absurd. https://t.co/9NyA5Iajsq

While some were disgusted at the fine, others took a positive attitude towards it.

This is a fine Auburn officials probably don't mind having to pay https://t.co/iI8eV3EXi5