The school system invites the public to come out and meet Herring during her Listening And Learning Tour.  Tonight she’ll be at Huffman High School at 5:30 p.m. 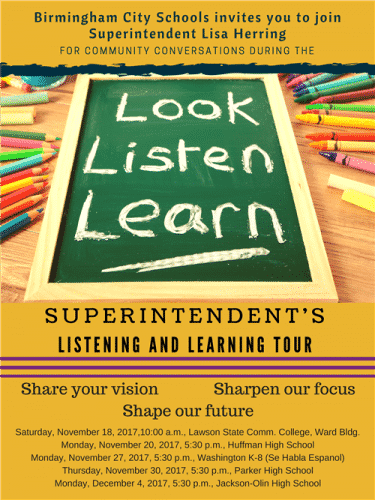 The tour kicked off at Lawson State Community College on November 18 and continues through Monday, December 4 at Jackson-Olin High School. Herring said she hopes to see a large section of the community at these events, according to a spokesperson with Birmingham City Schools.

Herring was elected superintendent in May, after the Birmingham Board of Education voted 6-3.  The board offered Herring a $202,000 salary.

“To be selected as the next superintendent of Birmingham City Schools not only humbles me but it also excites me,” Herring said in a statement released by the school system after the election. “I’m humbled that the board has exhibited a level of confidence in my ability to help transition and to help transcend the school district.”

Herring is the 10th person in 18 years to lead the district. In September 2016, the Birmingham Board of Education fired the previous superintendent, Kelley Castlin-Gacutan. The board fired her without cause after a 6-3 vote on Sept. 22, 2016.

She served 16 months on the job. The search for a new superintendent began in December 2016.

Dr. Herring comes to Birmingham after serving as chief academic officer for Jefferson County Public Schools in Louisville, Ky. since 2016. She is a native of Georgia.

We Want To Know

Do you have ideas to improve Birmingham City Schools? What do you think about the decision to give all the students free breakfast and lunch? More like that?

After the tour, Herring plans to compile the community’s ideas. Next, she will use them to form a strategic plan for the school system.

Birmingham proposes entertainment districts, plus 10 other priorities to Alabama legislature