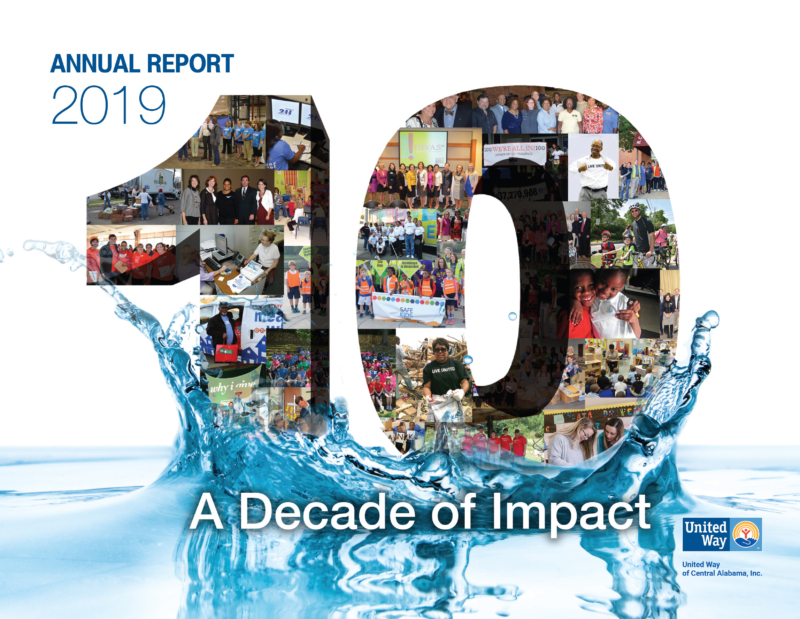 At its annual meeting earlier this month, United Way of Central Alabama, President and CEO Drew Langloh declared 2019 as an exclamation point at the end of an extraordinary decade.

“We have had transformational impact in the past 10 years fighting for each individual’s health, education and financial stability”, said Langloh.

Celebrating a decade of impact

This year’s annual meeting celebrated not only the past year but the last ten years. In United Way’s report to supporters and staff, they highlighted a remarkable “decade of impact.”

Here were some of the highlights:

2009 – As a result of the recession, United Way established the Community Crisis Fund to help keep up with the demand to feed people in need. The fund also assisted families with utility bills and helped people remain in their homes. They also provided lifesaving prescription medications.

2011 – In response to the April 27th tornado outbreak, United Way expanded its 2-1-1 Call Center to support 30 other call centers in the state. United Way mobilized more than 730 community volunteers to handle over 20,000 storm-related calls to help survivors. They also organized the Central Alabama Long-Term Recovery Committee, which brought together nearly 150 corporate, faith-based, government, and non-profit partners concentrating its efforts on the long term needs facing families and friends most severely impacted by the disaster.

2013 – The United Way launched the Bold Goals initiative—a plan to solve the community’s biggest challenges by aligning partners, resources, and agendas across the region. Today, the Bold Goals Coalition has 200 organizations working together on health, early childhood education, and workforce issues. 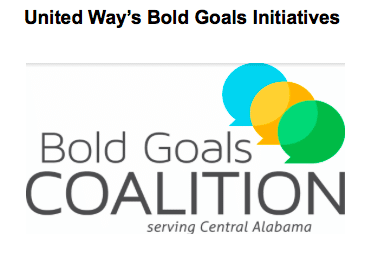 2014 – United Way launched the Priority Veteran program serving 644 homeless or near homeless veterans in its first year. Veterans are assisted by a myriad of programs, including the creation of a housing stability plan, access to medical and mental health services and job search assistance.

2016 – When Jefferson County suddenly found itself without anyone to operate the Meals on Wheels program, United Way stepped in to run the system that provides nutritious meals homebound seniors and the disabled throughout our community. Since then, the program has expanded routes and services to the number of homebound seniors substantially.

2018 – Charity Navigator, the nation’s premier evaluator of non-profit organizations, gave United Way its 4-star rating for the 16th consecutive year. Out of more than 9000 non-profit organizations nationwide evaluated by the group, less than a handful have consistently scored its top rating for financial health, transparency, and accountability. The United Way of Central Alabama is one of them.

To improve health equity in areas of Central Alabama with poor health outcomes, United Way and their partners are concentrating and removing barriers to healthy living.

Number of people who participated in Healthy Living Programs – 113,602

Raising the bar to provide children at all levels the best opportunities to learn and thrive is a strategic goal of the United Way of Central Alabama.

United Way of Central Alabama and its statewide partners are focused on helping hardworking families become and remain economically secure.

Many individuals in Central Alabama need immediate or temporary relief services to help them during hard times. United Way is committed to providing these services and meeting immediate needs such as food resources, shelter, assistance during a crisis or natural disaster, services to veterans, and references for other needs.

“We hope the community is proud of all that has been accomplished,” added Langloh. The challenges we addressed, the crisis we responded to and the big ideas we put into action – the focus has always been on helping people in need, bringing us closer together and building a stronger community.”

Want to learn more about United Way of Central Alabama and join others in supporting their programs? Visit their website at: www.uwca.org