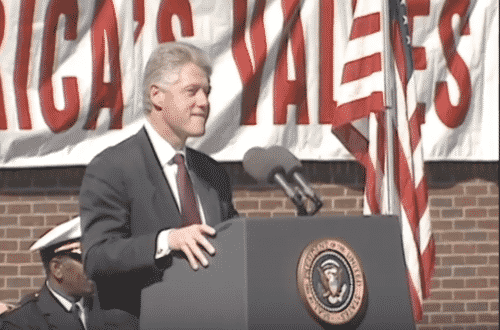 Washington’s Birthday? Lincoln’s? Both? While the reasons behind celebrating President’s Day may be unclear, one thing is for certain: today, I am feeling as patriotic as ever. This patriotism sparked my curiosity about Presidents who might have visited Birmingham. So, I cracked open the history books (okay, the Internet), and well, here’s what I found.

On the morning of April 16th, 1891, after making a stop in Anniston, President Harrison rode in by train to the Magic City. Crowds came in from Mobile, Selma, and Montgomery to hear the president speak. He met with Alabama governor Thomas C. Jones and Birmingham mayor A. O. Lane at the Caldwell Hotel, on the corner of 1st Ave N and 22nd St.

President Harrison lauded Birmingham and praised its booming industries. He told the story of Colonel Powell, a man who came to Harrison’s law office for help with a legal claim. However, Harrison said, all the man wanted to talk about was Birmingham! Powell raved about the iron and coal that the city boasted. Of Powell, Harrison said, “I thought he was a visionary.”

He was ecstatic with the crowd that had gathered, claiming to the onlookers:

“…we have here at Birmingham the largest and most enthusiastic concourse of people that has met us since we left the nation’s capital.” – President Benjamin Harrison

Roosevelt spent October 24, 1905 in Alabama. He spent most of the day in Montgomery, before arriving in at Union Station in Birmingham at 5pm. He was greeted by Alabama Great Southern Railway president Frank Anderson and Birmingham Mayor George B. Ward, who stumbled over his words while greeting the President.

The three men boarded a horse-drawn carriage and paraded up 20th Street. As they made their way to Capitol Park (now Linn Park), President Roosevelt noticed a man drop a pistol out of his pocket. He alerted police and the man was taken into custody.

Roosevelt then addressed the crowd from a platform constructed in front of the now controversial Confederate Soldiers and Sailors Monument. He praised the city’s booming industries and great people.

The nation’s heaviest president visited Birmingham on the most wonderful day of the year: my birthday! He arrived at the Birmingham Terminal Station on November 2nd, 1909 as part of a national tour.

He delivered remarks at a Birmingham Chamber of Commerce meeting that night and praised Birmingham’s unlimited growth. He stated that because of the city’s mineral wealth, Birmingham was set apart from Atlanta,  Pittsburgh, Chicago, Minneapolis, Seattle, and Los Angeles. He advised the community to not only invest in material wealth, but in the individual, and to improve the moral character of the nation.

Taft stayed in Birmingham through the night and spoke again on November 3rd. Alabama had voted solidly Democratic in the election, and Taft was a Republican. He joked with the crowd:

“The fact that you had so little to do with putting me where I am makes me appreciate the warmth and sincerity of your reception all the more.” – President William Taft

The President arrived at Birmingham Terminal Station at 8:45am on October 26th, 1921, in order to celebrate the city’s semicentennial.

At 10am, a grand parade began, and Harding was strolled through the business district in a white Premocar, manufactured in Birmingham by the Preston Motors Corporation.

The parade ended at the balcony of the Tutweiler Hotel, where the President encountered what he called, “the greatest, warmest, and most enthusiastic reception of his term in office.”

Afterwards, he delivered a speech in Capitol (Linn) Park, in which he called for equal voting rights for blacks and whites.

His final public appearance in Birmingham was at the Pageant of Birmingham in Avondale Park.

After leaving Tupelo, Mississippi, Roosevelt addressed a crowd in Woodrow Wilson Park (also now Linn Park) at 2pm on November 18th, 1934. His brief speech included his expression of understanding of the difficulties experienced during the Great Depression and a call for locals to support the Tennessee Valley Authority.

President Ford visited Birmingham the day before the 1976 Republican Primary, in which he was seeking re-election. He referred to Alabama’s competitiveness in sports:

“Winning seems to be quite a habit in Alabama, and the record of the great Alabama football team speaks for itself. My congratulations to my good friends Bear Bryant and the Crimson Tide, and to Shug Jordan1 and the Auburn War Eagles.” – President Gerald Ford

Reagan visited the BJCC twice; once in 1985 and once in 1986. He appeared at a fundraising luncheon and campaign rally for Jeremiah Denton, who was running for re-election to the US Senate.

Clinton came to the Magic City during his run for re-election in 1996. He arrived two hours late to Birmingham Southern College, where he addressed a crowd of 25,000 people.

President Bush was in Birmingham for a fundraising luncheon for Altamont School graduate and Senatorial candidate Bill Cabaniss. While in the Magic City, he delcared April 1990 as National Recycling Month.

He returned to Birmingham in August of 1992 for a Presidential campaign rally and delivered remarks at the Pride in Alabama Rally.

Bush #2 must have really LOVED Birmingham. So much so, he visited here 4 times. In 2001, he delivered a budget speech at Oak Mountain State Park and attended a fundraiser for Senator Jeff Sessions at the BJCC. In 2002, he visited the Alys Stephens center and the BJCC, where he gave a national security speech and hosted a fundraiser for gubernatorial candidate Bob Riley. In 2003, he attended a Bush-Cheney luncheon at the Sheraton Birmingham Hotel. And in 2006, Bush gave a presidential speech in Hoover, gave a volunteer service award to Heather Shufelt, and spoke at a fundraiser for Bob Riley at the BJCC, before boarding Air Force One at Birmingham Shuttlesworth International Airport and heading back to DC.

Barack Obama gives a shout out to Blazers Basketball

President Obama spoke at Lawson State Community College on March 26th, 2015. He spoke out against predatory lending companies and barriers to higher education. He recognized Rep. Terri Sewell and then-mayor William Bell in the audience. He also noted that the the Blazer basketball team had “busted” his NCAA bracket and congratulated them on their win.

Turns out, A LOT of Presidents have visited the Magic City. I mean, I can’t really blame them. Our little slice of Central Alabama is undoubtedly the coolest city on Earth (okay, maybe I’m a little biased). Regardless, to all past and future commander-in-chiefs who step foot in the Magic City, I only have one thing to say:

Were you lucky enough to attend one of these Presidential visits? Let us know!