The Washington Post. Bloomberg. A mention in the New York Times. Birmingham’s present and past continue to play out in the nation’s politics and news.

One the eve of Birmingham’s city election, it’s not hard to find a mention of Birmingham in the mainstream media.

Yesterday, on August 20, in a PowerPost, by The Washington Post, mayoral candidate Randall Woodfin was the focus of a story called “Even in red states, liberal candidates are climbing into power in the nation’s cities“.

While the story pointed out that Woodfin is a Democrat (He stumped for Clinton in the 2016 presidential campaign), it should be noted that tomorrow’s city elections are nonpartisan. The story also refers to tomorrow’s election as a primary. This is confusing, and the word is only being used in this story to describe an election where there is a runoff if no candidate receives the majority of the vote.

According to the story by David Weigel, tomorrow’s municipal election is part of a continuing trend.

“Birmingham’s August 22 primary is one of dozens of 2017 races where progressive candidates are trying to climb into power, knitting together community organizers, new activists and the remnants of Sen. Bernie Sanders’s (I-Vt.) presidential bid to form new left-wing majorities.”

I’d love to hear your thoughts about Weigel’s piece. Do you think progressives will gain a foothold in the cities of predominately red states? Why or why not? 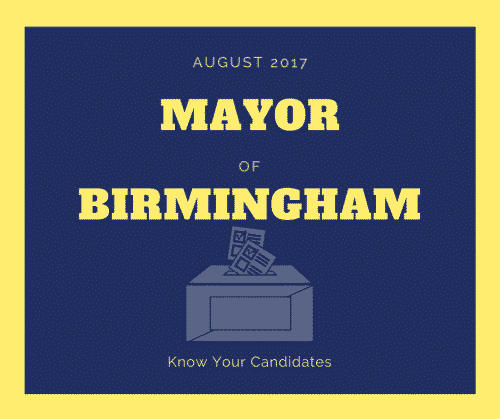 This morning, August 21, Bloomberg published a column called “Actually Getting Rid of Robert E. Lee Can Be More Difficult Than You’d Think“.

The Bloomberg column by Paul Barrett points out state laws, like the one enacted earlier this year by Governor Kay Ivey, that prohibit the removal, alteration and renaming of monuments, memorial streets and buildings, along with architecturally significant buildings on public property for 40 or more years. Other cities and municipalities have similar laws on the books that make it difficult to remove memorials.

Do you think these laws should be repealed or stay in place?

Birmingham was mentioned in The New York Times on August 19, in regards to a memorial piece about Dick Gregory, the acclaimed satirist and civil rights activist. He died Saturday at the age of 84.

The Times reported that Gregory’s convictions and humor paved the way for a “new wave” of black comedians in a predominately white entertainment world, citing the undeniable talents of Bill Cosby and Richard Pryor.

“It was Mr. Gregory’s conviction that within a well-delivered joke lies power. He learned that lesson growing up in St. Louis, achingly poor and fatherless and often picked on by other children in his neighborhood.

‘They were going to laugh anyway, but if I made the jokes they’d laugh with me instead of at me,’ he said in a 1964 autobiography, written with Robert Lipsyte. ‘After a while,’ he wrote, ‘I could say anything I wanted. I got a reputation as a funny man. And then I started to turn the jokes on them.’

Gregory’s activism was a life’s call for him. He joined a 1962 demonstration for black voting rights in Mississippi and ramped up his activism efforts from there.

He was arrested dozens of times. The Times reported that in a Birmingham, Ala., jail in 1963, he wrote that,

“He endured ‘the first really good beating I ever had in my life.'”

Are you a fan of Gregory? Ever heard of him? Personally, I thought he was a revolutionary, and I’m sad to hear of his passing.