The libraries of my life have been strange, liminal spaces for specific times and events, usually rainy day Scrabble tournaments.

But in high school, Iris Rinke-Hammer opened the doors to the Birmingham library, I walked in, and I learned the lesson Arthur had been trying to teach me all those years.

(Note: I know there are more libraries around Birmingham, however, these are the libraries I was able to physically visit on my Spring break.)

First of all, they have a café. That doesn’t make this library superior, but they made me some latkes and pierogi once, two things I’m pretty harsh about when judging, and they were really good. Jewish Auntie approved. The library itself is spacious, modern, so very Hoover. They have events almost daily for all age groups, almost every imaginable hobby, and they’ve been known to hold the occasional Wizard Rock concert. Best of all, most events are free. They offer classes in things like Word and Excel, English, German, knitting, and coffee tasting. The toddler story time sessions are lots of fun, really. If you have a toddler, babysit a toddler, or want to volunteer and hang out with some toddlers, the Hoover Library is

pretty much a literary day care. There are also Humane Society benefit events if you prefer puppies to human children. 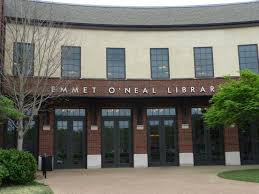 Emmet O’Neal is gorgeous. Located in Mountain Brook (it is the Mountain Brook Public Library to some), the stone building looks like a fairytale. The private study rooms that get lots of natural light and are pretty much sound proof makes the fairytale any student’s reality. They also have a Makerspace that includes a green screen and 3D printers. In addition, Emmet O’Neal hosts some great author events and public readings, there’s movie and trivia nights for teens, and video game and pizza nights. The EOL is also a great place to take some kids 5 and under for a day full of puppetry, stories, song and dance, and general merriment. Bonus, EOL has lots of readily available coffee to the study-weary patron.

The BPL has several locations with a very solid inter-library loan program. It

is one of, if not the, largest library systems in the South. The main branch downtown offers classes on everything from starting a business to how to do taxes or write poetry.  There’s also multi-branch chess clubs and board game clubs. The library has a blind and physically handicapped accessibility initiative and a books-by-mail service for people who cannot get to the library, which means they have a very good online database of available books. They also have amazing public records and archives with local papers dating back to the city’s founding. The system libraries also double as an art museum, featuring wall murals and local paintings. It’s an incredible set up, rivaling the best libraries in the country with its beauty, content, history, and community engagement.

Joseph Robinson, the rabbi at Temple Beth-El, introduced me to Little Free Library, a community book share program for children. It’s an awesome program that already has several libraries in Birmingham, mostly at parks and churches. Take a book and bring it back, or replace it with a gently used picture book of your own. Plus, a great excuse to go to the park, if you needed one at all.

5 Valentine’s Day date spots + the perfect jewelry for each