Briarwood is a megachurch that sits up on a hill. When my grandmother came to visit and saw the church from the highway, she called it “Fort God.” It is not the small, Northern church with a parking lot big enough to fit a trailer that is used for Sunday School.

Briarwood has two campuses that include a school, a seminary, and a radio station. It has over 4,000 members. Hunter Street Baptist has over 7,000 members.  Birmingham-Southern College has 1,400 students.

As many of you may have heard, Briarwood is going where no church has gone before. They have requested permission to start their own police force. They currently have law enforcement present on their campuses most of the time. This proposal has many raised eyebrows. This has many people excited.

The church claims that they are very busy. Because they are so busy with events and services, they need a police force of their own because getting local police to patrol is a bit of a hassle. They often rely on off-duty officers. I work for a Religious School who uses the same set up. I get it. You don’t always get the security you want. The church cites the 2012 Sandy Hook shooting as a source for its desire to have their own security at their disposal. They also said there was a new safety concern following the Emanuel African Methodist Episcopal Church shooting in Charleston, a massacre carried out by a white supremacist and is under investigation for being a hate crime. The difference between Briarwood and Emanuel is that Briarwood is not a historically black church.

Many critics of the case have brought up the 2015 drug bust that happened at Briarwood’s high school. It was a scandal that was handled in a way that left the public with little detail. The scandal was a saga that slowly revealed information over a few months, never being very upfront, and claiming they were trying to protect the students and their privacy during the process, a luxury typically not given to students involved in drug raids in this state. This history raises concern for many. There is a fear that giving Briarwood a police force of its own would be a way to cover crimes up.

There are also questions on whether this blurs the line between church and state. The proposal Briarwood gave says the police force would act similarly to a campus police force as used by small and private universities. There would be no jail/holding cell, and if anything serious were to happen, local law enforcement would be notified. They want mall cops. They want a security team. Briarwood is huge, after all. Maybe they do need the extra help. At the same time, what has happened that has required so much security, that calling the local police just wasn’t going to cut it?

Another concern that critics bring up – the Alabama Church Protection Act, a controversial bill that would allow appointed members to carry firearms on Sunday and would grant immunity if anyone were to be shot. It turns out, a lot of people have a lot of problems with that idea, and they worry that between a church police force and a church that defends itself with armed members, picking an ethical security solution is almost impossible.

There are a lot of questions and a lot of valid points.  Trying to learn about guns and church, I looked up the gun policy for 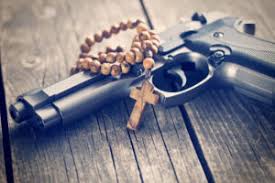 Prince of Peace, near where I live, and found a very interesting statement that I will leave you with:

“As a result of the State of Alabama’s new gun law, there has been some question as to how this will affect the Catholic schools in our diocese. The State Superintendent of Education, Dr. Tommy Bice, has issued guidance regarding this new law stating clearly that firearms are still prohibited on school grounds. Bice has stated, “All Alabama school systems should continue to enforce existing policies to ban firearms and other weapons from school grounds.” Schools should post ‘Firearms Prohibited” signs at entrances to the campus and the school building. Catholic schools will follow suit continuing to prohibit firearms or weapons of any kind on our campuses. Please refer to our Diocesan School Board Policy Book, #4600, “Weapons Policy,” for more information.

Our Lord Jesus Christ came that we might have life and have it in all its fullness. He is at the heart of our education. Therefore, Catholic schools promote the sanctity of human life and express concern for the dignity of every human being. One way for Catholic schools to protect life is to promote and provide a safe academic environment for students and staff. The possession of dangerous weapons is a threat to the health, safety and well being of students and staff in Catholic schools. Therefore, the possession of dangerous weapons is prohibited on school premises or at school sponsored activities.

We welcome your thoughts on this topic.