Martin Luther King Jr.’s birthday is tomorrow. This is the first part of two pieces recapping some of the Jewish involvement in the Civil Rights Era.

The history of the Jews in Alabama is one that is long, silent, and largely unrecognized. For one, the population of Jews has decreased by a large margin in the last three generations. Many left for Atlanta and Memphis, many stayed only as long as children weren’t in yeshivas (religious schools) before moving North, and many lost their Jewish identity for marriage, assimilation, the reasons go on and on. And while the journey of the Jews in the South is fascinating, I will be focusing only on the 1960s in Birmingham.

To learn more about the Jewish history of Alabama, I recommend There Are Jews Here, Shalom Ya’ll, and The Institute for Southern Jewish Life.  But before I can go on to Birmingham, let’s start with Selma.

This Shabbat, the National Synagogue in Washington DC was joined by Jewish leaders, rabbinical students, and members of communities across the country to commemorate Martin Luther King Jr.’s birthday in Selma, Alabama by spending the Jewish day of rest marching. Services were held in Temple Mishkan Israel, the historic synagogue in Selma and the day ended with a reception and recap at Knesseth Israel in Birmingham. Rabbi Herzfeld gives a sermon about the trip and it’s conception, stating the prevalence of anti-semitism in his home city of DC and the verbal attacks on his congregation by politicians and people on the street made him think of some key Jewish principles: education, taking a stand, and recalling and actively remembering the past.

The trip was arranged with help from Joanne Bland, co-founder of the National Voting Rights Museum in Selma, who had been arrested on Bloody Sunday in 1965.  To recall the events of Selma as a tool for Jewish education has been confusing to many people I have explained this trip to. Jews went to Selma this weekend because Jews went to Selma in March of 1965. Jews walked across the bridge to be beaten and arrested. The Institute of Southern Jewish Life puts the percentage of white activists in the South in the 1960’s being Jewish at around 50%. Rabbi Abraham Joshua Heschel, considered one of the greatest modern Jewish thinkers, marched right alongside Dr. King with flowers around his neck. 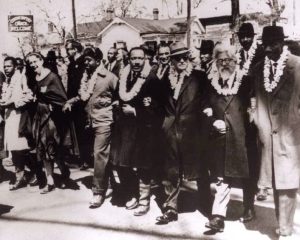 He was joined by four other rabbis who were arrested and sat in jail throughout the holiday of Purim. The rabbis were offered release, but told police they refused to leave until they let black protesters leave as well. Purim is the festival to commemorate Esther, the Jewish girl who saved her people with her chutzpah and faith. Rabbi Saul Berman read the Megillah (Book of) Esther in the jail cell.

When the protesters were released, the Jews were asked not to march again, but since they were released on Shabbat, they couldn’t ride the bus used to take people away from the jail and they marched back to their host family’s homes. All of this to say, when David Duke criticized Jews for celebrating Purim, Rabbi Herzfeld decided to socially engage his congregation instead of throw more nasty words back.
Esther’s story is associated with being hidden and concealed. This is very much the story of the Jews, especially in the Civil Rights Era.
On this Sunday before Martin Luther King Day, please consider making a donation to one of the many wonderful Civil Rights museums and monuments in Alabama, or watch one of these documentaries tonight and I will see you guys here tomorrow.