Super Bowl Sunday has come and gone. Undoubtedly, this time each year is one of the busiest times for grocery stores, with customers stocking up for parties and get togethers. But could the way that we shop for and purchase our groceries be changing right before our very eyes? Let’s take a look at recent changes in the Birmingham grocery scene.

You’ve probably seen that bright green alien spaceship-looking logo high in the sky in the middle of downtown. Well, that’s Shipt, a Birmingham start up company that has been offering delivery from local grocers since 2014. Well, now they’re going big time, as the company was recently purchased by mega retailer target for a whopping $550 MILLION! Area targets have already rolled out the new service and announced that they plan to extend their Shipt operations to stores across  Alabama, Florida, Georgia, North Carolina, South Carolina & Tennessee this month. Shipt has announced it will continue offering delivery from other Birmingham area grocers. 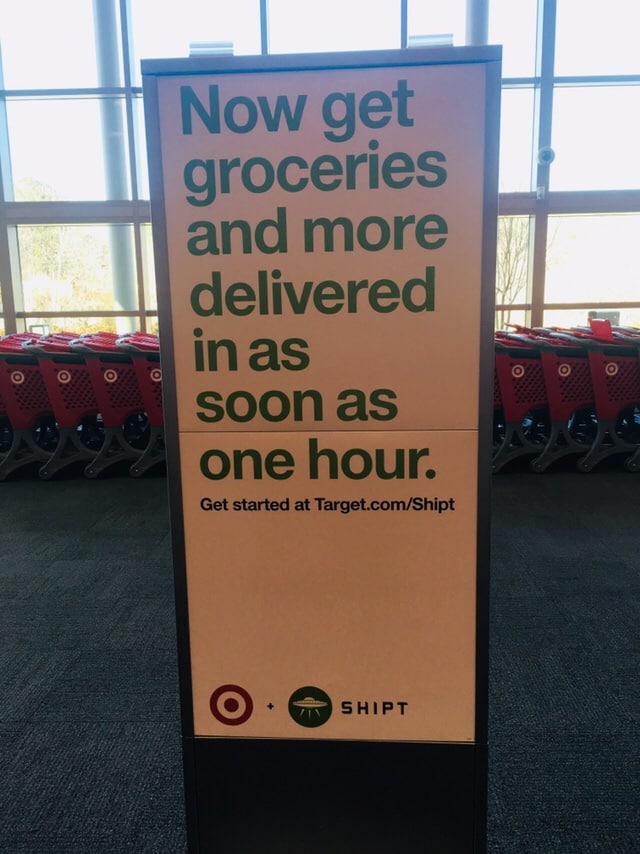 Perhaps in response to Shipt’s success, Publix has announced that it will begin offering delivery services in many locations across the Southeast (Birmingham, included). The service is powered by Instacart, a personal shopping service similar to Shipt.

Publix has seen success in its swanky downtown location, which opened almost a year ago to the day. It seems to be doing well in other areas of the state as well, announcing plans for new stores in Mobile and Decatur. But how will Publix respond to the growing mega-grocery scene in Birmingham? According to their corporate website, Publix currently has no plans to develop new stores in the Birmingham area.

Publix shoppers have praised the chain’s fresh produce, wide selection, and clean stores. But, with companies like Target and Wal-Mart maximizing on a grocery + everything else style of shopping, will the chain be able to keep up? Only time will tell.

It’s safe to say that Amazon has dramatically changed consumer shopping forever. And while we’re still getting over Amazon’s over-looking of Birmingham in its search for HQ2, Amazon doesn’t seem shaken.

And while Whole Foods has previously been known as a boost for local farmers and growers, that could be all changing. A month after being acquired by Amazon, Whole Foods slipped it under the rug that they would be gutting parts of their local sourcing program and charging higher fees for allowing local vendors to provide in-store samples.

In a world that seems to be moving more and more towards technology friendly shopping, how could the world’s leading online shopping company get it wrong? This just goes to show that the move to a more futuristic way of shopping may not be as easy or blunder free as we might have imagined. C’mon, Amazon, we believe in you (even though you didn’t believe in us).

Southeastern Grocers, which owns grocery chains Bi-Lo, Harvey’s, Fresco y Mas, and Winn-Dixie, has been in significant financial troubles in recent months. Speculation that the company could be headed for bankruptcy has caused many people to wonder if their local Winn-Dixie could be closing for good. Perhaps the recent innovations by companies like Target and Publix have caused traditional grocery stores, like Winn-Dixie, to see a decline in profit. At any rate, it’s clear that the grocery landscape is changing, and if Southeastern Grocers wants to keep up, they better start making some changes. And soon.

So, what does this mean for our Mom and Pop stores? Well, who really knows.

The Future of Local Grocers

Birmingham wouldn’t be the same without Western Market, would it? The local grocer chain operates 3 stores in the area: one in Mountain Brook, one in Highland Park, and one in Vestavia. But some people have speculated that Western’s future could be in jeopardy after Highland Plaza, the shopping center where its popular Highland Park location is, was recently purchased by commercial real estate firm Daniel Corp. The strip, which also includes area restaurants Taj India and Hot and Hot Fish Club, a package store, nail salon and tattoo shop was purchased in January for a stunning 4.7 MILLION! Daniel Corp. has stated they have no plans to redevelop the shopping center or Western Market, but simply saw this as a great investment opportunity.

But with big box stores seemingly becoming more and more powerful (and convenient), what does this mean for stores like Western Market? Will customers flock to their opportunity to grocery shop from home, or is the satisfaction of physically picking out your food enough to keep customers pushing shopping carts around?

How do you feel about the changes in Birmingham’s grocery scene? Let us know!